We are in the middle of the Greenlight campaign (click to go there) these days with Trespassers, and have some insights about the process. In case you wonder, we are tracking the links that go there, so you will provide some new data in case you follow the link before 😉

Update: almost a week after the launch date (one hour left for a full week), we are ranked #10. We have updated the post with our “gut feeling” about why we climbed all of a sudden to some ranks.

If you have missed it -and probably you did, as we are still terrible at promoting our games-, Trespassers is a fast-paced action game made with pixel art and hard work. It is targeted to players between 25-35, for the nostalgia factor, although younger players have enjoyed it as well when we demoed it at events. Its Greenlight campaign started on November 3rd, around 10:45 PST (19:45 local time in Spain). We wanted to build some momentum for the weekend, and it seems that we are matching our expectations. Let’s get with the insights

Here is our progression, plotted as we remember from this four days. The data taken represents that values at 00:00 local time, so the first point represents a small gap of around 4-5 hours, instead of a full day (remember we launched at 19:45). 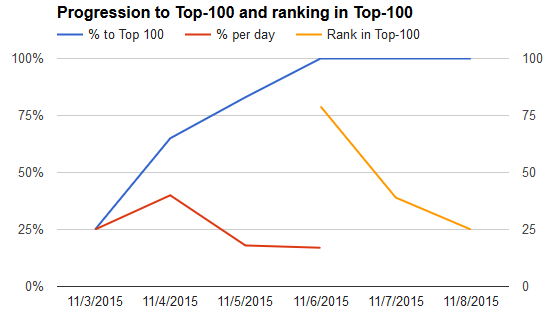 Notice that, for the orange line, lower is better. When we reached Top-100, things changed; we were at 97% and in roughly 18 hours we quickly climbed to rank #36.

We rushed the first hours. Notice the red line the till the first day: 25% + 43% = close to the top in few hours. It seemed really easy to get there, seemed like our game was gonna made it so quick … but things are never so easy 😉

We “burnt” our local contacts the first two days. We were really active the first days, reaching out local media, acquitances and so on. We got many votes and views thanks to this interaction

Progression was slowed, even stalled. We had some hours from the second to the third day were the progress slowed, even got stalled. We got as few views (not votes) as dozens per hour. We worried a bit, although we had a backup plan that we didn’t finally need.

Friday evening was the day. We had been stalled for the whole friday between 93%-98% towards the Top-100, and suddenly, in a matter of two hours, we were ranked #79. The progression continued till night. Thanks guys!

The first days we reached our local audience. We were more active tweeting news, reaching small local media and acquitances, and so we got many comments and upvotes from them. But, as you can see after 4 days, these are a really small percentage of users (we think that those tweets reached the “es-es” segment)

We had our campaign in spanish as well as english. As you can see, roughly 13% of the visitors were spanish speakers, but 78% of our audience are US english speakers. Treat them well … or maybe not so much 😉

Of course, treat them well. They won’t usually notice if you do, although the opposite stands true. Let’s take a look at the duration of the sessions:

At the bottom left corner there is the average duration of the session. One day before, the average was 00:01:06, but as you can see, barely surpasses the first minute. Our trailer is 1:00 length, so we understand that there is a quick interaction after watching the trailer, maybe looking a pair of screenshots, reading a bit of stuff, and voting. How much does the user have to decide after watching the trailer? Not so much if we assume they are watching the full minute. So they did not spend too much reading descriptions before deciding. Hence, it does not seem as important. There are users that like to read descriptions, but work harder on the trailer than other aspects.

They came from ¿outer? space

Mostly, users reach the Greenlight page via a “direct link”. Here are the channels data:

It seems that the direct traffic is the most important. We do not know how to interpret this, as the social interaction was tightly related to votes in Greenlight -we posted something new, we got a small boost of votes and visits. We think that the “Direct” here refers also to the links we posted in some tweets, as the “Social” channel only seems to have brought 163 viewers, a fairly low number for around 1000 followers on Twitter and 3 days posting content. So take this with a grain of salt. We think this information is the most important, as it is useful to evaluate how we were performing through our actions.

If you can clarify a bit of this data, please feel free to contribute 😉

And they are who we wanted them to be

No surprises here: male audience, mostly between 25-35, with a pretty decent group younger. The surprises, althought not really important in out opinion, came with the interests of the viewers:

Again, with a pinch of salt. It would suggest that we had to have promoted the game in TV/Movies forums, but we think it is better to stay close to the industry. Moreover, on the top right corner you can see that, as we understand, that data comes from only 16% of the sessions.

We managed to know from some fellow developers, that the same friday we climbed up to the Top-100, some games were approved on Greenlight. Maybe that left some space free on the top positions, so the ones that were waiting for their turn, as was our case, suddenly climbed up and started being ranked in the Top-100. Sounds feasible, and logical. This has been repeated on monday, when we all of a sudden climbed from #21 to #11, in a matter of minutes. Literally less than 10 minutes. Anyway, we still got votes every day, and we believe that other games ranked above us still got them too. Now we feel really stalled, although this does not worry us at all.

Build momentum. Friday evening/night was REALLY active. We were almost stalled at around 97% with 840 positive votes, and in 10 hours we were ranked #51 with around 150 additional votes. Although that may also be due to Greenlight games being approved. Anyway, build momentum if you can.

Twitter was our main marketing tool. The hashtags are a really powerful way to reach the audience, so we made use of them. We feared being a bit tiresome, as we were tweeting every 2-3 hours. But that may have been true for a not so wide audience, as the tweets get buried so quickly that many people never realize about them. Hashtags? #indiedev #gamedev #steamgreenlight #greenlight and, in our case, #pixelart #madewithunity. The trick was trying to avoid burning one set of hashtags quickly, although we could have done better here. And, remember, everytime you want to post, be sure to put a screenshot/GIF with it. If it does not get you many more votes, it will bring some new followers.

Community. We have gone to few local events, were we met people really interested in the game. They were few, but helpful reaching wider audiences, as know who we are and what game do we have. Also, some “hub” entities (as Made in Spain Games) were very kind and promoted the Greenlight campaign via Twitter.

Forums. We didn’t plan enough material for posting in forums, so we somehow failed planning this. Plan in advance in case considering this option.

Google Analytics. That’s how we get some insight of our campaign. It is really easy to do (it is even documented in the Steam Greenlight site), and can shed some light on how well you are doing.

“No” votes are not -always- “negative” votes. We believe that they do not count towards Top-100 as much as the “Yes” votes. Even more, the question asked is “would you buy this game?”, not if you want this game to be on Steam. The difference is important, specially for your morale if you are getting so many “No” votes. Maybe it’s not the kind of game, maybe I wouldn’t buy it, but dont mind others do, maybe … if you have done your work, keep calm.

We were stalled with 12 visits/hours all Friday morning.  Do not fear being stalled -at least before weekend-. We were, but then everything changed. Keep posting and interacting.

On Top-100 things changed: -coinciding with the start of the weekend- we managed to climb quick around 50 ranks.

Hope all of this provides valuable data for those who, as in our case, are facing Greenlight for the first time. For us, it is time to make sure that their votes are worth something, so back to work!